This morning I was developing a JUnit Testcase for a current project. I found it very rewarding and useful to do this work. One step in the process was to apply "design for testability". I had to test a piece of code that was some 30 lines long and part of another function that was already some 60 lines long. In the process the 30 lines became another independent function. This has the effect to make it testable independently and also cleaning up the code since now both functions where only half a page long which makes the code much more readable. Also things get reusable this way. I could keep going on an arguing in favor of test driven development and design for testability. What struck me this morning was that I remembered a presentation "TDD, Where Did It All Go Wrong" in which Ian Cooper told the story of TDD projects that were not going well (enough) and why in recent projects he has seen a lot less TDD.

One of the arguments was that test code was extra code and needed modification far too often even if the requirements had not changed or only slightly changed. It seems to me that this dicussion leads to the question of the value of the three items

Quite a bit of the arguments in software engineering seem to revolve around the question "What is more valuable?". Some will answer that code is the only result you need and keeping track of the requirements and writing test code is just Muda or "enterprisy cruft".

You'll find a lot of other positions e.g. the one that I am going to take today that are based on the traceability triangle of the three items shown as a graph below: 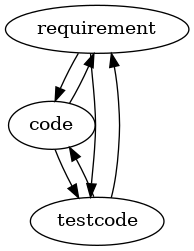 The traditional view of TDD seems to be something like 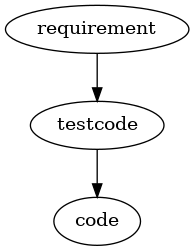 with the assumption that software development is working like a "pipeline" where you give your requirements as inputs and then work from there. Even in agile projects that are based e.g. on user stories the initial input comes from the users's requirements. From the second requirement on you might see the effect that there is a need for refactoring. An additional requirement or a modification of a requirements leads to a change of your code and may be of the testcode.

So this explains some of the links in the graph above. What some people find strange is that coding might lead to changing requirements and also writing testcode leads to such changes. Why should coders and testers have an influence on the needs of the people that asked for the software originally?

There are many reasons for this. Very common is that the clarification of requirements is initiated by feedback from the software as it is realized. Also people might change their mind or come up with new ideas. This interaction cycle is a very strong reason to work incrementally and iteratively and has been a big motivitation for the agile movement.

Let's get back to the value discussion. The assumption is that their is some value to requirements, code and testcode but it may vary a lot on the circumstances. Not every requirement has the same value as another requirement. That is why you have priorities and milestones in projects in the first place. Now one could assume that the code that depends on some requirement "inherits" the value of the requirement. That is only partly true. Of course code that is based on important functional requirements can not be removed without an outcry of the users. Just imagine the "buy" button would disappear on amazon :-)

For non-functional requirements the story is much more complex and it get's even more interesting when you look on a timeline. That is what I thought about this morning.

Will the testcode that I created and the code refactoring I did be still valuable in the future?

And will also the effort in tracing and binding the result that I am currently putting into something that I feel to be proper software engineering be still as rewarding as it felt this morning?

The answer might simply be "no". And this seems to be the aspect which Ian Cooper rightly brought up. All the results and traces may create a spaghetti-effect that we do not want and will give us a lot of effort in the future with varying value. Basically we want to avoid this spaghetti-effect. So not creating any testcode would give us less coupling and less artifacts to bother with and would reduce the effort. But unfortunately it would reduce a lot of value in cases where the value of the testcode is indeed high. I think the problem is with the artifacts - be it requirements or code or testcode or other software engineering items - where the value is degrading over time. We would need a "cheap" way of getting rid of these. So Java has a concept called SoftReference "which are cleared at the discretion of the garbage collector in response to memory demand".

Wouldn't it be great if we could handle software-engineering artifacts in the same way? A piece of requirement, code or testcode would sort of "throw itself away" when it's value has degraded to a certain treshold. Oh what a relief of work that would be ...