No fear of Meta

When you start talking "Meta" you might end up very lonely. Meta denotes an abstraction level that seems to be so far away from reality that quite a few people simply do not bother. Basically there are three abstraction levels on which you can deal with things:

Why you should not fear Meta

I think you should not fear to go all the way up to the meta level when trying to understand the world around you. If you have any fear overcoming it is most useful to have no fear of "Meta" when you work with computers, software and data to solve your daily problems.

How to describe Meta in plain english language

This article tries to use plain english language. To still give you the opportunity to find out about the more mathematical/scientific/academic approaches to the "Meta" thing I have made links available right in the text and a list of references at the end. Eventually I intend to "disambiguate" some of the links when there are multiple truths out there.

The Meta Disambiguation page on Wikipedia is an interesting starting point although it doesn't even point to a "Meta" thing/concept as described here.

A thing (also called object, entity, instance, item, element) is something, anything. If you can point at it or talk about it or call it "it" then it is probably a thing.

There is a thing called "concept" and that makes Meta interesting. Talking about a thing needs to clarify Whatchamacallit?

Example for a thing 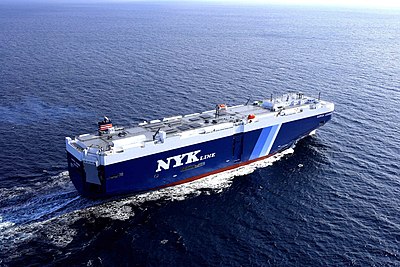 What is it it?

How to describe it

These descriptive statements all have a three part structure:

We could also say:

This three part structure is going to get interesting later.

The concept level tries to give similar things a name to group these things. A concept might also be called a group, category, class,classification, subject, topic, name, definition, entitytype, type or kind.

So any of the names I gave this Auriga Leader is a potential concept.

The following sentences would all be valid / true:

So the statement "is a" about a thing links it to some concept that has a name. Later we will see that the three parts of an "is a" sentence

are just a good example for the three-part structure of statements about things and concepts that are easily understandable by humans and computers.

IMHO the most precise way to clearly define a concept is to list all things that can be truely given the name of the concept. For example the concept Continent is the name for the things: Africa,Asia,Europe,North America,South America,Antarctica,Australia/Oceania. For quite a few concepts this complete listing is possible even if the list is very long. And given todays world wide access to internet-information it gets even more feasible. The issue with this approach is just that different people have different notions about what the truth is - if you read the Wikipedia Continent article you can see that even the concept Continent might lead to different lists of things that are Continents depending of which definition of "land mass" you follow. So saying "is a" is not quite precise - it would be more polite to say "I believe this is a" or "I would classify this as a". For example instead of saying "Afro-Eurasia is a continent" you'd say "I would classify Afro-Euroasia as a continent".

Concepts are often treated like bags or drawers in which you put things. Mostly it is already helpful to name a few things that you can put in the bag or drawer. These Example Things are very helpful for the further clarification of this idea.

IMHO the scientific approach for defining concepts is to define clear criteria for the membership of individual things in a concept. The continent example above shows that there may be multiple definitions of continent and that the membership to the concept "continent" might even change over time The continent Pangae e.g. does not exist any more. Given multiple definitions of a concept using the same term leads to homonyms. The same word meaning different things to different people or at different times. An example for a shifting meaning is the concept "planet" which at a time included Pluto for most astronomers but doesn't anymore according to the IAU since 2006-08-24.

Example for a concept

"Vehicle carrier" is a concept.

In the english Wikipedia the "Vehicle carrier" concept is called "Car carrier" and explained in the same article that explains "Roll-on/roll-off ro-ro ships". Wikipedia articles of other countries have separated articles:

According to International Shipping News there are 795 Vehicle carriers in operation world wide as of 2017.

At the meta level we consider things that are concepts. This is only possible if we accept that a concept is a thing. As stated above we would have to give a list of members of the concept "concept" or we'd have to define the membership rules - something is a concept if

So first "concept" is concept. It is a member of the group of individual things it defines/describes. So it is no wonder that on the Meta level we need things and a concepts that will likely have "Meta/meta" as part of their name. On the meta level we switch the view. Concepts describe things. On the meta level we might think of meta-concepts that describe concepts. We don't even really have to do this switch of view and introduce the meta-level in the first place - bringing structure and system into the description of things and concepts is actually all we need to have a meta-level. So being on the meta-level is merely being on some kind of abstract discussion level about things and concepts. The bad new is - that discussion level is usually very abstract and not easily accessible to "the rest of us".

Instead of spending a lot of timing with fearing that discussion level we'll simply continue with some example Concepts that might fit the meta level.

Example of a concept on the meta discussion level

"Link" is one of the most important concepts in the world to be worthwhile to be discussed on the meta-level. The concept "Link" is also called relation, connection or association.

Let's go thru the three levels from Thing to the Meta discussion level:

In 2017 the vehicle carrier Auriga Leader has connected Ports in Japan with Ports in the United States. These Links can be described with three elements

The Auriga Leader has followed shipping routes which are Travel paths with can be desribed as Links from one port to another.

This model shows Links on multiple levels. The "start" and "end" Links are on the Thing Level and the "is a" Link is on the Concept level. The statement I just made is on the Meta Level.

When describing Links on the meta level it is important to understand that a link connects exactly two things.

On the meta-level we'd rather like to think of a link-concept as connecting two concepts (a special case being that the concepts are the same concept). 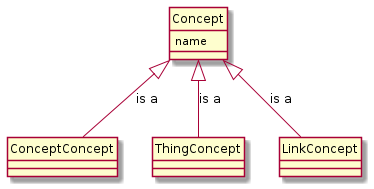 Since quite a few people do not like abstract talk about things it is very helpful to bridge the gap between concrete things and the abstraction as a concept by using well chosen examples (in latin that is called the Pars pro toto approach).

There are three different cases for example things:

The Auriga Leader is an exotic case of a Vehicle Carrier. There is only one such solar power experimental vehicle carrier.

See Triple and Triples in the context of SPARQL